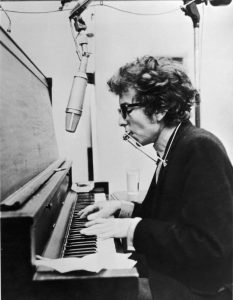 Bob Dylan – The Times They Are A-Changin’

The Times They Are A-Changin’

Come gather ’round, people
Wherever you roam
And admit that the waters
Around you have grown
And accept it that soon
You’ll be drenched to the bone
If your time to you is worth savin’
And you better start swimmin’
Or you’ll sink like a stone
For the times they are a-changin’– Bob Dylan

Global conflicts in trade are beginning to impact economic outcomes in very fundamental ways. The disruption resulting from these trade skirmishes is evident in both the bond and equity markets. The times they are a-changin’…

In the second quarter, financial markets have reflected the fear and uncertainty investors face given the growing global geopolitical tensions that have been exacerbated by trade disputes. This has been most evident in the bond market as 10-year US Treasury notes have repeatedly flirted with dropping below the 2% level indicating that investors’ expectations of economic growth are diminishing. The equity markets have reacted with greater volatility in pricing as market participants continuously adjust directions to often conflicting data.

In the first quarter of 2019, inventory accumulation appeared to overshadow the slowdown in business investment and capital expenditures resulting in a positive market reaction following the dismal performance in the fourth quarter of 2018. However, markets have been less sanguine as more recent data has tended to highlight the negative trends in business investment which has resulted in forecasts of future economic growth to be adjusted downward.

Coincident with lower expectations of growth have been statistics reporting weakening manufacturing volumes and slower service sector output. The continuing trade uncertainties are causing businesses to question an ongoing reliance on production in China and examine opportunities elsewhere.

Europe is also facing the prospect of even slower economic growth. Trade issues have reduced the outlook for exports resulting in lower manufacturing activity. Business investment and capital expenditures have also been slipping. Slowing activity in China, a major recipient of European exports, is also a concern.

The UK faces greater challenges as issues surrounding Brexit have served to destabilize domestic politics. In an already tepid business climate, trade concerns and political uncertainty are only making the outlook for restoring or even stabilizing the economy less likely.

Despite all of these concerns, global equity markets have all tended to the positive side over the quarter although the ride has been turbulent. It is worth noting that without the USA, global markets have not reached new highs and still remains about 15% below the cycle’s peak. In the US, without the FAANGM (Facebook, Apple, Amazon, Netflix, Google, Microsoft) stocks, the S&P 500 has returned closer to 6% per annum over the past six years, as opposed to the all-in figure of over 11%.

We are in the eleventh year of what has been a slow but positive period of economic expansion.  In fact, this is now the longest economic expansion in modern history. In part, credit must be given to the overly accommodative monetary policies of the global central banks following the financial crisis. These policies have allowed the developed economies to partake of a sustained period of tightening labour markets in an environment of low inflationary pressures. While politicians may have thought that they have discovered the elixir to defeat the business cycle, there have been excesses and imbalances percolating below the surface, not the least of which are massive debt levels in both the public and private sectors. With the prospect of slower economic growth, central banks are likely to continue to restrain rates.

A big concern would be that central banks in the developed nations respond to the threat of recession with massive fiscal and monetary stimulus leading to a result similar to Japan in the 1990’s: three decades of low growth, low interest rates and even larger deficits (Note: this would be preferable to a total meltdown). While we do not believe that the business cycle has been defeated, we do not think that a protracted period of stagnant growth need result from policy initiatives. Technology is accelerating change and productivity enhancements are likely to follow…

Yes, the times they are a-changin’…