Markets have been surprisingly robust since the lows of late December despite signs that global economic growth has been moderating since 2017. While there have been some positive stimuli over the intervening period, the overall trend has been for successively lower estimates of GDP growth. The US markets have been buoyed by the tax reductions in 2018 that have contributed to strong earnings growth which have been used to finance share buybacks and dividend increases. Little has been spent comparatively on capital expenditures to support future operations. Wage gains and employment have also made some progress in the US. The Eurozone has been less buoyant as the Brexit fiasco continues to play out and trade wars take their toll. The German economy has slowed at a faster rate than pundits pontificated while Italy actually reported a technical recession. While the Chinese economy continues to grow at a faster pace than the other developed economies, the fact that growth has been slowing has large implications for its trading partners given the size of the economy. The ongoing trade fight with the US does not bode well for China’s economy particularly at a time when they are attempting to rein in excessive debt levels locally. 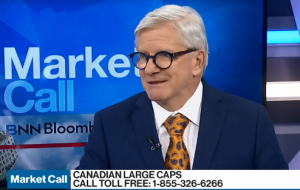 Markets have been surprisingly robust since the lows of late December despite signs that global economic growth has been moderating since 2017.

Against this backdrop, central banks have been attempting to tighten monetary supply which has precipitated fears that over tightening might choke what growth momentum is left. Given evidence that these fears may be well founded, many of the central banks have been expressing that some moderation in this tightening process may be needed to keep the economies from slipping into a recession.

It appears that there has been a disconnect between the stock markets and the direction of the global economy. As such, the markets are vunerable to an external or financial shock or an error in monetary policy by the central banks.

Investors are advised to invest cautiously in these conditions.

Manulife Financial Corporation, MFC-T, Owned personally and by clients, Last Purchase May 2018, $23.47
Manulife is a leading Canadian-based financial services group with operations in Asia, Canada and the United States. The company is well positioned in Asia where they continue to experience high growth and profitability; 50% of Manulife’s core earnings stem from Asia. Since Roy Gori has assumed the CEO’s chair, Manulife has begun to address some of the less profitable legacy issues. These steps will further solidify an already strong balance sheet as several billion dollars of capital will become avaiable. After a period of several years, the company is well positioned to continue periodic increases to the dividend. The valuation is attractive at just over book value with a current yield of 4.3%.

ARC Resources Limited, ARX-T, Owned by clients, Last Purchase March 2016, $18.69
ARC in one of Canada’s leading conventional oil and gas companies with operations in Western Canada. Management is focused on the development of ARC’s high-quality long-life assets. Liquids rich opportunities in the Montney offer the prospect of higher margins. Liquids now represent over 25% of production. Management has been adept at expense control and managing an effective hedging program. As production has grown, ARC is less sensitive to Western Canadian natural gas prices and management targets that by 2021 less than 40% of revenues will stem from Western Canada. The valuation is compelling at less than book value with a yield of 6.2% and a dividend well covered by cash flow. Arc has one of the strongest balance sheets amongst its peers.

George Weston Limited, WN-T, Owned by clients, Last Purchase, January 2015, $96.88
Weston’s operates fresh and frozen bakery operations in the US and Canada and food distribution through Loblaws; Canada’s leading food retailer. The company is emerging from a challenging year in 2018 as bakery operations underwent a strategic shift in product offerings and production optimization. During this period, sales from the bakery division were depressed. Loblaws is now over 50% owned by Weston as the result of share buybacks. The Company has a very strong balance sheet. Implicit in Weston’s valuation, the ownership of Loblaws represents some 54% with another 26% reflected by Choice Properties REIT. The current dividend yield is 2.2% but Weston has, in the past, been known to pay the occasional special dividend.

You can view the entire BNN interview here>>