Temple Hotels Inc has a portfolio of over 3,600 rooms, including 800 in Fort McMurray

Temple Hotels Inc. (TSE:TPH) has sealed a $32.8-million deal to buy the iconic Hotel Saskatchewan in downtown Regina, the buyer has announced. This is the latest addition to the company’s portfolio of hotel properties, representing over 3,600 rooms. Temple is the largest hotel owner in Fort McMurray, Alberta, with over 800 rooms across eight properties. 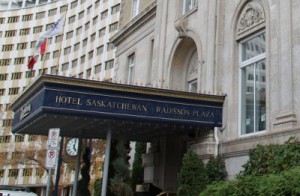 Hotel Saskatchewan is one of Regina’s most famous buildings. It will become the REIT‘s fourth property in Saskatchewan by the end of March, adding to its Temple Gardens Mineral Spa Resort in Moose Jaw, Saskatoon Inn & Conference Centre in Saskatoon and Wingate Inn in Regina. The new owner believes that the ten-storey building is “the premier hotel property” in Regina and will seek to ensure that it maintains its top position, Temple Hotels’ chief executive Arni Thorsteinson said.

Temple will back the purchase with a three-year, $21.25-million mortgage loan, while the remainder will be paid in cash. The investor also plans to spend $6 million over about three years to renovate the guestrooms and the lobby. The purpose of this refurbishment is restoration, rather than to give the heritage property a modern look, Temple’s executive vice-president Gino Romagnoli told the Metro.

The deal will not result in staff reductions and more personnel may be hired if there is growth in business, Romagnoli also said.

Hotel Saskatchewan, which first opened its doors in 1927, was initially one of a chain of hotels built and managed by Canadian Pacific Railway. It has 224 rooms, about 14,000 square feet of meeting space and a number of amenities. Famous people who have stayed at the hotel include Queen Elizabeth, Prince Charles, Sir Paul McCartney and the Rolling Stones.