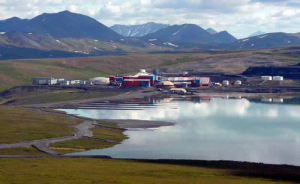 The Vancouver-based company, the largest producer of steel-making coal in North America, reported a net loss attributable to shareholders of C$2.1 billion ($1.60 billion), or C$3.73 per share, in the three months to end-September.

However, despite the big writedown, investors appeared to give the company credit for continuing to deliver solid operating results. On the day the results were posted (22 October), the stock rose 43 cents or five per cent to $8.79 as Teck reported an adjusted profit of $29 million, or five cents a share, exceeding modest forecasts.

“The commodities cycle continues to provide a very challenging environment, but we are responding,” chief executive Don Lindsay said on a conference call.

Lindsay’s optimism is backed-up by the company’s cash position, with it ending the quarter with $1.8-billion in cash, which is more than the $1.5-billion it estimates is required to fund its share of a major oil-sands project.

Teck has maintained respectable margins in its coal and base metals businesses by continuing to cut costs. It has also profited from low oil prices and a weaker Canadian dollar.

Regardless, weak commodity prices (particularly for steel-making coal) are sapping the company’s profitability. Teck’s realized coal price was just US$88 a tonne in Q3, down from US$285 in the same period in 2011, when the market was at its peak. Teck’s adjusted profit in that quarter four years ago was US$742 million – an unimaginable figure in today’s market.

Teck Resources Limited is engaged in the business of exploring, acquiring, developing and producing natural resources. The Company is focused on steelmaking coal, copper, zinc and energy. The Company exports seaborne steelmaking coal and produces mined zinc. The Company also produces lead, molybdenum, silver, and various specialty and other metals, chemicals and fertilizers. It explores for copper from its interests in Antamina in Peru, Quebrada Blanca and Carmen de Andacollo in Chile and Duck Pond in Newfoundland. The Company has around 97.5% interest in Highland Valley Copper. The Company produces mined zinc, primarily from its Red Dog mine in Alaska, the Antamina mine in northern Peru, and its Pend Oreille mine in Washington State. Its energy assets in the Athabasca oil sands region of northeastern Alberta include its interests in the Fort Hills oil sands project, Frontier oil sands project in various other oil sands leases in the exploration phase, including the Lease 421 Area. More from Reuters »