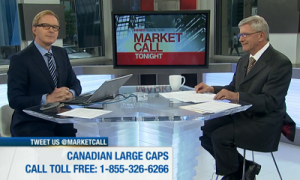 Mark Bunting:          Tonight on ‘Market Call’ we have Michael Sprung, President of Sprung Investment Management. He is taking your questions on Canadian Large Caps.

Mark Bunting:          Hello and welcome to ‘Market Call Tonight’! I am Mark Bunting. Thanks for joining us, as always, and as always, here are three ways to reach us. If you have a question for Michael Sprung, there is the email address, the toll-free number, or you can tweet us on Twitter; the handle is @marketcall. Good to see you, sir!

Mark Bunting:          So some late breaking news today, we’ve been talking all about it, the Empire Company, through Sobeys, or vice versa, are buying Safeway, or at least the Safeway Stores, the U.S. Safeway, for 5.8 billion, what do you think of the strategy?

Michael Sprung:        Well, you know, it has been long rumored that who is going to buy Safeway, and so I don’t think it’s a big surprise, but I’ve got to hand it to the Empire group. I mean, they’re pretty savvy people, I think. They still will be a bit behind Loblaws in terms of their size and their reach, but not that far behind anymore.

As I understand it, I think they’ll have combined sales of around 24 billion or somewhere in that range.

Michael Sprung:        Right! So Sobeys still got a ways to go to catch up to that. But it will be interesting to see what sort of synergies, whether or not they change the banners. Because in the past we’ve seen, especially with Loblaws, we’ve seen they like to run under a multiple banner headlines; they’re even going back to using Provigo in Québec now.

Mark Bunting:          They over time changed most of those banners.

Michael Sprung:        Yes, they did. But historically Loblaws still has Zehrs and Loblaws, and then they all have their discount chains and so on, so I think there is some advantage to them perhaps having multiple banners out there.

It will be interesting to see what they do with Safeway. I think Safeway is a well-known brand, where its been particularly strong, so you wouldn’t want to necessarily give that away.

Mark Bunting:          Right, it’s a well-known name in Western Canada, and they said on the conference call, which I was on, that it’s too early to know what they’re going to do with the banners.

Mark Bunting:          Let’s get to the markets here, and just quickly, have you ever owned Empire?

Mark Bunting:          Okay. A lot of volatility in the markets really since kind of late May, May 22 or so when the Fed had those comments about some possible easing off with the quantitative easing, and the minute came out and so on, and we’ve seen so much volatility. How are you finding it in the markets right now?

Michael Sprung:        Well, this has been a challenging time; certainly I think it’s been somewhat frustrating. You see the U.S. market up 15% for the year and we’re basically flat here. Emerging markets have generally speaking been down so far this year.

But going into the year, I think there was some expectation that perhaps things were a little bit overvalued here. We’re getting a bit of a correction. Pace of the recovery is still somewhat uncertain.

People keep talking about the slowing economies, but nonetheless, they are more or less positive still. People are still expecting global GDP growth well over 3% this year. That’s still largely held up by China at 7.5.

But even the U.S. should outpace Canada this year and be above 2.5% or so, and Canada seems to be stuck down around 2 for the time being. But that can change quickly if the commodity cycle turns again.

And I think that recent setbacks are really presenting more opportunities for investors in this market. Particularly if you’re looking longer-term, three to five years over the next business cycle, we certainly expect that many of these commodities will come back, and now that they’re so depressed, that’s the time to be looking for where you want to place yourself for the next cycle. 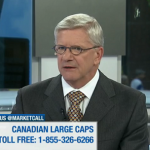 Mark Bunting:          Right! And you’ve got some ideas along those lines in your Top Picks, and we’ll get to those in about 50 minutes time or so, but after this break we’ll get to some questions from Michael Sprung on Canadian Large Caps.

Michael Sprung:        I have used stop-losses in the past. I don’t generally use them. I find that if you’re monitoring your stocks day-to-day you’ve got sort of a bandwidth that you allow them to operate within, and quite often you buy a stock and it goes down and you have to step back and reassess your position.

But generally speaking, no, because when you’re trying to stick with fairly good quality companies to begin with, just because they become out of favor in the market is not necessarily a reason to just throw in the towel and take a loss, unless you’re doing it for some tax driven reason. So generally speaking, we don’t use them, have used them occasionally.

They’ve done pretty well. We expect to see them to be producing well over a million-and-a-half ounces a year in the not too distant future. But on a price basis I think there are some relatively better values in the gold market right now. But they’ve all been hit so hard, I mean it’s hard to differentiate.

But we’ve got things like Barrick selling at seven times earnings, and that’s pretty rare.

Now, there have been some reasons for that, but I think in the longer term they’ll sort those problems out.

But no, we don’t currently own Yamana. I think their last quarter, it was a slight miss, but you can’t watch these things quarter to quarter. Like everyone else, they’re suffering with some inflation in terms of equipment, labor, materials and so on. These mines are getting terribly expensive to develop nowadays.

But Yamana Gold I think is in a fairly good position going forward; it’s certainly one that we keep our eye on.

Mark Bunting:          All right Michael, here is an email on New Flyer Industries from Murphy; would you recommend this company, NFI?

Michael Sprung:        I would recommend it. I think that a few years ago there were some management changes and they brought in some people that were much more production and operations oriented.

Certainly, there is going to be a big build out of transportation systems somewhere along the road here. Unfortunately, municipal governments are quite strained in what they can spend in North America right now. But I think that New Flyer is in a good position to take advantage of that longer term.

So overall, I think that they’ve got a few competitors; Orion and so on, but they seem to be a little less of the factor in the market more recently. So I expect them to pick up some market share going forward over the next few years.

Jennifer:                 I want to ask about TransCanada, sort of representative of the pipelines, do you think they’ve bottomed right now, and would you buy it in Canadian or U.S. funds? And if not, do you have something else you’d recommend in that area? Thanks!

Michael Sprung:        Well, I think the Pipelines, generally speaking, are not a bad place to be looking. Certainly, with all the new development of resources, we’re going to want to move them, and I don’t believe that that’s all going to happen by rail necessarily. So I think pipeline companies are in a relatively good position.

TransCanada, I mean the big question with them has been to date the XL Pipeline, and that appears to be a little bit of a political football. And should that be down entirely, I would expect this stock could take a little bit of a hit, even from here.

Overall though, I think that if your outlook is, again, three to five years, I think it’s pulled back a little bit here, I think one could safely buy it. Depending on your circumstance and what your objectives are, I’d probably say, if you’re living in Canada, why expose yourself to currency risk, buy it in Canadian dollars.

On the other hand, if you’re balancing your portfolio and you have a need for U.S. dollar exposure, by all means. But I think for the most part I would just say, it’s a very liquid stock, it doesn’t matter what side of the border you buy it on, and I would tend to buy it in Canada.

Mark Bunting:          Which of the pipelines do you hold for clients?

Michael Sprung:        We have a small exposure to Inter Pipeline, and as you know, they’re becoming a Corp now, and I think they’re in a pretty good position. We expect to see it continuing.

Like to learn more about how our approach can reduce risk and volatility in your portfolio? You can contact us here>>