Mark Thorburn: Founded in 2005, Sprung Investment Management help clients moderate swings in market volatility through a “value investing” approach. Aimed at preserving wealth and providing a real rate of return after fees and inflation, they are known for employing philosophies that run contrary to current investment trends.

Sprung is different from other investment management firms and that they make a deliberate attempt to minimize trading and transaction costs. They make decisions based on due diligence and staying in the course rather than reacting to market volatility.

In June 2014, we asked Michael Sprung about his current view of the economy.

Michael Sprung: Well, I think right now we’re at a very interesting crossroads. Gwyn Morgan was writing the other day in the Globe and Mail, He noted that Der Spiegel had an article about a week or so ago and the headline was, “Troubled Times: Developing Economies Hit a BRICS Wall.” He’s referring of course to the BRICS, Brazil, Russia, India and China. The fact that those economies to some extent seem to have stalled. Particularly Brazil which we have seen their problems lately in getting the Olympics together, Russia of course facing all the sanctions, India primarily lots of potential bad loans there and corruption and China of course the slowdown in the economy and the overbuilding of infrastructure and so on of the last number of years some of it not in such great quality and so on.

Where as what we’re seeing in the U.S., the economy is actually an expanding economy now. On an absolutely basis, the U.S. is likely to contribute more to global GDP this year than China. So, where the BRICs had a large surplus contribution before, now the sort of developed economies including Britain and Germany and the U.S. and so on, are actually going to have more of a contribution.

So I think this is quite interesting because it affects Canada in a lot of ways. It affects Canada in terms of demand for resources. We’re seeing more manufacturing in the U.S. Now, the U.S. is still our largest export partner, but we are depending more and more upon the emerging economies. You wouldn’t know that to look at the stock markets today. To the end of last week, the total return on the TSX was still over 9%. Now, we’ve pulled back a little bit since then. Whereas the U.S. they have been closer to four and the emerging economies you are likely to see two.

In terms of the stock market reaction, I think we’re in a very interesting time here. Our view is that particularly in Canada perhaps the stock markets are a little bit of ahead of the fundamentals. So we would not be surprised to see a pause. Now, if we did see a pause due to the fact that the U.S. is picking up to the extent that it is, we think that could be an opportunity for investors to step in.

Mark Thorburn: What is your view on the new strategy at Rogers Communications Inc. (TSE:RCI.B)?

Michael Sprung: I think Rogers faces a number of issues and problems to get over. One of them is the backbone of their infrastructure in terms of technological ability; it appears to have stalled out relative to some of the newer things that are available such as fiber. They do compete in the wireless world, but they’ve been having trouble. They’ve defined their new strategy in terms of trying to get back both business and retail confidence to try to reestablished themselves as technological leaders and to try to just regain some of the share that they’ve lost over the years.

Mark Thorburn: There have been a number of Canadian banks that have reported strong earnings this quarter, are there any other banks that you think will surprise on the upside?

Michael Sprung: Well, we’re certainly hoping that tomorrow this Canadian Imperial Bank of Commerce (TSE:CM) will surprise on the upside. Now, so far we’ve seen Bank of Nova Scotia, Royal, TD and National Report. Certainly, with the exception of the National, I think the results were far ahead of expectations and more of the real surprises came in.

A lot of people have been talking about the head winds and credit and the debts of consumers and yet we’re seeing provisions for credit losses at least the ratios remained relatively low. So credit has been surprising on the upside.

Net interest margins in this environment to a great extent have been expanding. We’re seeing great results out of international banking and capital markets have surprised more on the upside than the downside particularly with respect to trading and so on.

Now, we own exposure to Royal Bank and Nova Scotia and CIBC. I think tomorrow when CIBC reports, people are going to be looking very closely not only at the credit situation but also the success of their new credit card programs since they lost Aerogold to the TD. Aerogold did contribute somewhat to TD’s results, but I think this new Aventura Visa card that CIBC has coming out is going to surprise people on the upside as well. So overall, we’re expecting to probably have fairly healthy results out of the CIBC tomorrow and we look forward to seeing that when it happens.

Mark Thorburn: Do you anticipate that merger and acquisition activity is going to pick up in 2014?

Michael Sprung: Yes, we do. We anticipate that M&A activities going to pick up for a number of reasons. We’re in a slower growth world than we were in previous cycles. In order for companies to grow, I think they’re going to depend more and more on M&A activity to achieve that incremental growth. I think we’re already seeing it in a number of areas, energy being one. But we’re also seeing it amongst pharmaceuticals and other companies today. In a world where GDP growth is going to be much slower around 2.5% to 3% in order to achieve that, and I think beyond organic growth we are going to see a much more dependence on mergers and acquisitions. So that should make the investment bankers quite happy. 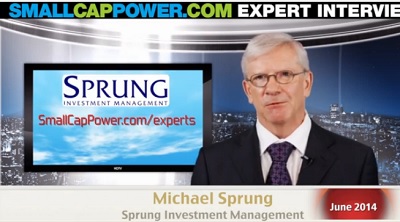 Michael Sprung: Well, in terms of places where we continue to find value, I’d have to say that despite the fact that energy is been amongst the best performing sectors of the TSX so far this year, we’re still finding relatively good value. I mean energy as a whole has been up about 14% year-to-date. And despite the fact that we’ve seen natural gas prices increased by both 12% which I think has surprised people on the upside, however, West Texas Intermediate for instance is only up about 3.5% year-to-date. We’ve seen a lot of the stocks beginning to run. I think largely as a result of the production increases that we’re beginning to see particularly in the U.S. and that is also contributing to the efficiencies in the economy to some extent particularly on the manufacturing side.

So in terms of exposure, we still today like in Canada for instance. Now, and Canada has really, really surprised people with some of these things that they have done in terms of the recent of issue of PrairieSky by Encana Corporation (TSE:ECA) at prices above what anybody thought that they might be able to sell that at. That’s been a great surprise spinning out of the royalty business in Clearwater. The purchase of the large chunk in Eagle Ford I think has also been particularly a positive surprise to the market. We expect going forward that that will continue to be reflected in positive results in the share price at least over the next number of years.

We also think that the dependence on natural gas make it down on the next couple of years to both 75% of production from the 85% where it currently is.

We also like Cenovus Energy Inc (TSE:CVE) because that’s a company where you have fairly predictable production increases over the next number of years. The capital goes again to it. Again, they manage to maintain the cost of that oil sands development to a great extent. It’s a very efficient company, a very efficient management and they do have a both upstream and some downstream assets as well.

Finally, of course, Suncor Energy Inc. (TSE:SU) which has been a long-term holding of ours which is more of a fully integrated play but again good balance sheet, great management, and again expanding production over the next number of years. So we like all three of those and we’ll continue to hold them.

Mark Thorburn: Do you have any favorite small cap companies you’d like to mention?

Michael Sprung: Yes, occasionally we do go down into the smaller cap and in fact what people might even consider almost micro cap. One exposure we have is Temple Hotels Inc. (TSE:TPH). Now, eight of the twenty-one hotels that Temple owns are in the Fort McMurray area. Given the limited expansion available there, they have quite a lock on the market. They also have been very aggressive acquirers of hotels in other areas primarily in the west.

We see this is a company that, today you can buy for roughly eight times available funds from operations that used to be a unit trust, so we still tend to look at it that way. Yet, it carries a very healthy yield around 8.5% which reflects a payout ratio of about 75%, so I think that’s quite sustainable. So there is a company that we’ve done very well on that I think we will continue to hold unless it appreciates quite dramatically from here.

Another example would be Alaris Royalty Corp. (TSE:AD) which is a more recent purchase of ours. This is almost like a private equity firm but rather than take equity interest directly in companies, they issue preferred shares which escalate in terms of their payouts provided certain benchmarks are made and if they don’t, then it can convert into real equity.

So they have had an expanding dividend over the last five years and we suspect that that will continue to expand. They currently have 12 investment partners, the largest of which represents both 17% of their funds coming in. They plan to reduce that to about 10% into not too distant future. So we’re seeing a diversification amongst health care, industrial, retail other areas, they tend only to invest into private companies which have good long-term tenure track records at least. So I think it’s been so a very, very smart management team that is designed to this company which is very, very lean at head office.

So again, it’s currently selling under $29 I think. Anything under that level it certainly could represent a good longer term purchase.

Mark Thorburn: Thank you for taking the time for the interview today, Michael.