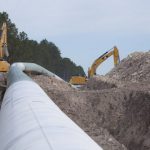 The Keystone XL project, which is still awaiting federal consent, is now estimated to cost $1.974 billion, a leap from $921.4 million four years ago. TransCanada spokesman Shawn Howard said this is a result of a number of factors including the protracted regulatory process, inflation, currency changes, labor cost increases and materials storage.

The project to build the extensive pipeline network, which is to carry 830,000 barrels per day of Canadian crude from Alberta’s oil sands to the Gulf Coast, hit the buffers after running into stern environmental opposition.

Howard revealed that the company had not yet revised cost estimates in other U.S. states that the much-debated crude oil pipeline passes through. The latest total cost estimate for Keystone XL is $5.4 billion, although TransCanada has said that the figure will be higher still once it receives the green light from regulators to start work.

Chief executive Russ Girling said, however, that TransCanada is likely to haul Canadian oil sands crude by rail whether the project gets the go-ahead or not. Although he couldn’t specify on the exact size, he revealed that the company is contemplating a “rail bridge” from the oil sands to a crude oil hub in either Cushing, Oklahoma, or Steele City, Nebraska, where its pipelines can be tapped.

To put it in perspective, Keystone XL is only one of $38 billion in projects that TransCanada currently has on its books. The company states that all of its projects are “supported by strong market fundamentals and underpinned by long-term contracts or the revenue stability of cost-of-service regulation.”

TransCanada’s net income declined by 13.81%, year over year, to $0.59 per share during the most recently completed quarter. However, this was among the strongest results reported by any company in this industry.