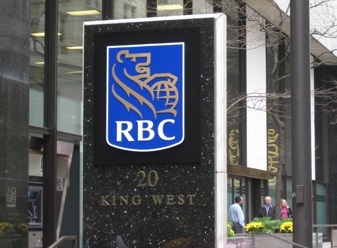 As the Financial Post reports, the Toronto-based bank has capped off its most profitable year to date with solid fourth quarter earnings, which were boosted by personal and commercial banking net income.
For the quarter ended October 31, the bank reported net income of $2.3 billion, or $1.57 a share on a fully diluted basis. That’s up 11% compared with $2.1 billion, or $1.39 per share, a year earlier. Cash diluted earnings per share were $1.59.
Personal and commercial banking accounted for $1.15 billion of the figure for net income, which represents an 8% rise from a year earlier. Wealth management profit climbed highest of all its divisions, jumping 41% to $285 million in the past 12 months.
The bank’s capital markets segment, however, fell significantly during the quarter with net income falling 14% from last year to $402 million.
However, Royal Bank was not the only institution to find life difficult in capital markets, with the Bank of Montreal running into similar problems in that side of the business.
As Dave McKay, RBC president and CEO, also pointed out, the bank’s capital markets’ lending business may have dropped compared with the last quarter, but it is still up 21% year-over-year.
“We delivered another strong quarter of earnings growth, demonstrating the strength of our retail businesses and capital position, as well as our continued focus on efficiency management activities,” he said.
Stockwatch – Royal’s 2014 per-share earnings should rise 10.6%, to $6.13 from $5.54 in 2013.

We believe that successful investors focus on the quality of the assets they buy. Speculators focus on guessing the future prices.
We believe that the success of a particular investment is always relative to the price you paid.
Like to learn more? Please contact us here>>
The opinions expressed here are ours alone. They are provided for information purposes only and are not tailored to the needs of any particular individual or company, are not an endorsement, recommendation, or sponsorship of any entity or security, and do not constitute investment advice. We strongly recommend that you seek advice from a qualified investment advisor before making any investment decision.