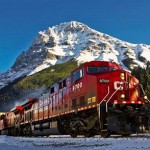 Stockwatch – Canadian Pacific generated some $400m in net income in the third quarter.

The results, which show its revenue for the three months ended Sept. 30 totalled $1.67 billion – and mark a further improvement on last year – come soon after a proposed merger with U.S. peer CSX Corp. fell through.

The quarter’s $2.31 earnings per share fell below the estimate of $2.35 per share while revenue was short of the $1.69 billion generally expected by analysts, according to Thomson Reuters data.

The company’s operating ratio, however – which is a gauge for efficiency – showed up well, coming in at a record low of 62.8%, which is a better figure than was anticipated.

The carrier company is still dusting itself off from unsuccessful talks with CSX, which it had hoped would end with the two firms joining forces. The Calgary-based company is looking to expand the North American rail network, but the “no deal” response from CSX has left it scratching its head.

CP did not go into detail as to why the “exploratory conversations” did not yield the outcome it was hoping for, but it did suggest that regulatory concerns generally appeared to be a “major deterrent” to major railways joining forces. It added that no further talks are planned with CSX of Jacksonville, Fla.

CP’s chief executive officer, Hunter Harrison, suggested, though, that the company is far from pessimistic about future growth. “Despite recent volatility in commodity prices, we are confident in the strength of the franchise and are on track to finish the year with CP’s strongest quarter to date,” he noted.

Stockwatch – Canadian Pacific’s net income grew by 47.56%, year over year, to $2.11 per share during the second quarter, as reported in July. This was among the strongest growth seen by any company in this industry.