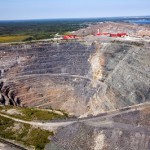 Adjusted revenues for the second quarter amounted to $1.1 billion, generating adjusted net earnings of $164 million in the period — up from $117 million a year ago, the company said in a statement.

Goldcorp reported net earnings, attributable to its shareholders, of $181 million, or $0.22 per share, compared to a loss of $1.93 billion in 2013, which was mostly a result of a $1.83 billion one-off impairment charge linked to Goldcorp’s Penasquito mine in Mexico.

The company’s president and chief executive Chuck Jeannes said that among the main drivers behind Goldcorp’s positive second quarter-results were the continued solid production and cost performance across the company’s portfolio.

Goldcorp said that all-in sustaining costs stood at $852 per ounce of gold, dropping from $1,227 per ounce in the second quarter of last year. The decrease was made possible increased production efficiencies and lower sustaining capital.

Jeannes said the cost improvements Goldcorp accomplished via its Operating for Excellence program, coupled with grades and recoveries helped earnings from its Penasquito mine, which is to reach about $130 million in the quarter.

The company also announced the commencement of gold production at its Cerro Negro mine in Argentina — Goldcorp’s newest gold mine. Jeannes believes it marks the beginning of a period of increased production, decreasing costs and reduced capital spending for the company.

Goldcorp said its growth projects – Eleonore in Quebec and Cochenour in the Red Lake district, still under construction, continue to progress at a steady rate. It is expected that Eleonore and Cochenour will reach production in 2014 and 2015, respectively.

The company hopes to begin a pre-feasibility study before the end of 2014 for its new Camino Rojo project near Penasquito, and to complete the study in the first quarter of 2016.