The Canadian federal government has told Canadian National Railway Company (TSE:CNR, Mkt cap 64.27B, P/E 23.35, Div/yield 0.25/1.27, EPS 3.37, Shares 816.38M) to “up their game” after imposing a fine on the Montreal-based company for failing to comply with an order that requires it to move a minimum amount of grain each week.

The Globe and Mail reported last week that Agriculture Minister Gerry Ritz’s warning comes in response to a call from CN chief executive officer Claude Mongeau to lower the grain shipment minimum to allow the railroad to comply with the order. 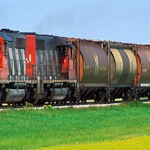 Mongeau said that the company has not had enough demand from grain shippers to meet the minimum weekly volumes the government ordered in the spring.

Ritz, speaking from India on a conference call with reporters, however, dismissed the company’s claims that demand from grain shippers is insufficient, highlighting the “some 27,000 cars and some 6,000 producer cars that are ordered that have not been spotted yet by CN.”

The fine is the first levelled under the Fair Rail for Grain Farmers Act, which was set out in the spring to address agriculture industry complaints that the country’s two major railways were providing an inadequate service that left traders unable to meet demand from buyers and farmers facing cash shortages.

The federal government in the spring ordered CN and Canadian Pacific Railway Ltd. to each move 536,250 tonnes of wheat, canola and other grain each week or face a fine of $100,000.

Mr. Ritz said the severity of the penalty in the case of CN has not yet been decided. According to the original text of the act, railways would face “maximum penalties of $100,000 a day” for failing to handle 500,000 tonnes of grain each week for the next 90 days (beginning April 1,) When the act was extended in August, the fine was reduced to up to $100,000 “per violation,” which the government now says means per week.

CN spokesman Mark Hallman, however, said any penalties levied against the company in connection with its transportation of Western Canadian grain would be unfounded, saying that the railway has actually exceeded the government’s minimum target by more than one million tonnes since the spring.

CN’s net income grew by 21.54%, year over year, to $1.03 per share during the most recently completed quarter. This was among the strongest growth seen by any company in this industry.