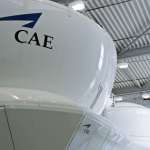 The financial results for the quarter ended Sept. 30 come on the back of the news that the Canadian aviation-training and simulation products provider has secured new contracts totalling $120 million.

Marc Parent, CAE’s president and chief executive officer, appeared to be content with the figures for the three-month period and immediately turned his attention to the future.

“Performance for the second quarter was in line with our outlook for growth in Civil and Healthcare, and for resiliency in Defence… For CAE overall, we are reiterating our expectations for a stronger performance in the second half and solid growth for the year as a whole,” he said.

Expectations are likely to be heightened by a substantial increase in revenue, which swelled to $529.4 million from last year’s $478.2 million, exceeding analysts’ prediction of $508.90 million, according to Thomson Reuters I/B/E/S.

Earnings per share also moved in the right direction, notching up to $0.16, compared to $0.15 last year, falling in line with analysts’ estimates.

CAE will pay a dividend of $0.07 per share effective December 31, to shareholders of record at the close of business on Dec. 15.

CAE is likely to see strong demand for both its hardware and software as the world’s airlines continue to replace old planes with new ones. The company also stands to benefit from increased demand for training pilots of business jets, as sales of such aircraft rise with an improving U.S. economy.

Due to US cutbacks in defense spending, CAE will do less business selling simulators for training military pilots. However, because of a deal it recently inked with General Atomics, a California-based maker of surveillance aircraft, CAE will now be training the operators of drones. General Atomics boasts 24 per cent of the U.S. drone market, so CAE’s deal is obviously significant.

We believe that investment management is about managing risk, not chasing speculative returns.