Stock Watch – Scotiabank also announced that it is planning to sell its stake in CI Financial Corp. 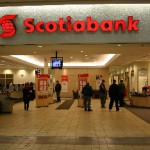 The lender is buying the 20% stake from Canadian Tire Corporation Limited (TSE:CTC.A, Mkt cap 8.56B, P/E 15.58, Div/yield 0.50/1.86, EPS 6.89, Shares 76.27M), becoming the latest big bank to foster its presence in the segment. In the past 12 months, almost all of the country’s leading lenders have introduced new cards or revamped their existing offerings to win more clients at a time when the industry is witnessing a major overhaul.

The changes in the Canadian credit card market were prompted by the split of Aimia Inc’s Aeroplan portfolio between Canadian Imperial Bank of Commerce (TSE:CM) and Toronto Dominion Bank (TSE:TD) last year. Other banks took quick measures to promote their cards, launching billboard, newspaper and TV commercials to ensure they would be seen by as many potential clients as possible. Earlier this year CIBC agreed a deal with local restaurant chain Tim Hortons to launch a co-branded credit card that will offer loyalty rewards to clients of the bank.

Scotiabank will pay cash for the shares in Canadian Tire and has also pledged to fund up to $2.25 billion in credit card receivables. The bank will become exclusive partner for any of the unit’s new products and marketing campaigns.

Commenting on the deal, rating agency Fitch said it is unlikely to impact the bank’s ratings. The agency described the deal as “modestly positive” for the lender as it would immediately add to its earnings.

Scotiabank also announced that it is planning to sell its stake in CI Financial Corp., Canada’s largest independent wealth manager. The bank, which owns 37 per cent of CI, (worth $3.8-billion,) said it intends to “monetize” the stake at a time when wealth managers are in heavy demand and the S&P/TSX composite index it at a record high. Since the beginning of last year, CI’s stock has climbed 44 per cent. CI has $97-billion worth of assets under management.

At Sprung Investment Management, we believe in investments that provide safety of principal and a satisfactory return. In our view, investments that do not meeting these requirements are speculative & should be avoided. Would you like to learn more? Please contact us.