Stock Watch – HudBay waived a condition of its bid that two-thirds of Augusta’s stock had to be tendered for the transaction to close. 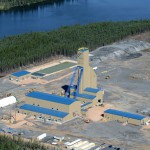 The offer for the developer of the Rosemont copper-molybdenum project near Tucson, Arizona, was due to expire last Friday but has now been extended until May 27.

The Toronto-based company, which already owns around 16% of Augusta’s issued and outstanding common shares, has offered 0.315 of a Hudbay share for each share of Augusta. That values the target at some $458 million, or $3.15 per share, based on stock prices on Friday when Augusta shares closed at $3.01 on the Toronto Stock Exchange.

With the BCSC decision, Augusta will have more time to find alternatives to Hudbay’s offer. The company stated recently that it had signed confidentiality agreements with ten possible investors as part of its strategic review process.

In March, Hudbay waived a condition of its bid that two-thirds of Augusta’s stock had to be tendered for the transaction to close.