The company is restructuring its operations to reduce its reliance on low-value natural gas. Output of oil and natural gas liquids averaged 67,900 barrels per day in the quarter ended March 31, up 56 percent from a year earlier. Natural gas production fell 2 percent to 2.81 billion cubic feet per day. 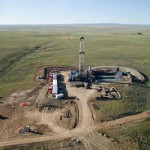 Encana reported net profits of $116 million compared with a loss of $431 million in the year-ago quarter, which included an income tax adjustment of $243 million. The company’s cash flow, a key indicator of its ability to pay for new projects and drilling, increased by 87% to $1.09 billion, or $1.48 per share.

Encana recently agreed to pay $3.1 billion for properties in the south Texas Eagle Ford shale-oil field owned by Freeport-McMoran Copper & Gold Inc‘s (FCX.N). The company is paying for this and other oil acquisitions by selling gas fields as it concentrates its operations on six, oil and natural-gas liquids rich regions including the Eagle Ford.

Encana closed the $1.8 billion sale of much of its Jonah gas field in Wyoming this week and reports that other sales are pending.

It is also moving ahead with an IPO of a new company called PrairieSky Royalty Ltd. The new entity will own about 5.2 million acres of fee simple mineral title lands in Alberta. PrairieSky will not be involved in any exploration, development or production activities on this land. It will focus on securing investment from third parties, generating revenues from fees paid by companies producing oil and gas on the properties. The preliminary prospectus states that Encana will hold 75 per cent of the new company after the initial public offering.