Stock Watch – Canadian construction services provider Churchill Corp has decided to change the name it has held for three decades and operate under the brand of its largest subsidiary, Stuart Olson Inc. 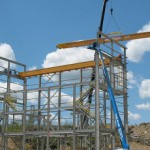 Stock Watch – Churchill Corp will change its name and operate under the brand of its largest subsidiary, Stuart Olson Inc.

The move received overwhelming support from the company’s shareholders at its annual general meeting in Calgary last week. The change is expected to boost the company’s competitiveness by allowing it to align more closely the branding and integration of its subsidiaries. The rebranding is part of its strategy to become an integrated construction contractor active in the commercial, institutional and industrial construction markets.

Stock Watch – the company’s common shares and convertible debentures will start trading under the symbols SOX and SOX.DB, respectively, later this month.

Earlier in May Churchill reported a contraction in its first quarterly loss to C$600,000 from C$1.2 million in the same period the previous year, thanks to a solid improvement in its general contracting and commercial systems operations.

The company was awarded C$250 million worth of new contracts in the first three months of the year, with its backlog hitting a record C$2.21 billion as of end-March, up from $2.12 billion at the end of last year.