Or perhaps, beware of Greeks issuing bonds! That certainly must have crossed the minds of European politicians and bankers as they attempted to negotiate a solution to the current impasse. It would seem that we are heading towards the last chapter in this modern Greek drama. Or perhaps not? 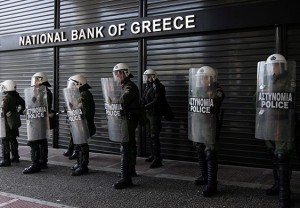 The economic woes of Greece have dominated headlines and investor concerns over the latest quarter.

At first blush it would seem to be a simple matter to negotiate a refinancing of the Greek debt given that most everybody acknowledges that Greece is unable to pay its debts as it now stands. However, this ignores the political / economic realities of the situation. Greece needs more money and a more flexible repayment schedule. Germany and the EU on the other hand are loath to cut too much slack to Greece as they want to avoid other, much larger, countries following the Greek example in refinancing, or depending on your view, shirking, their obligations. Unfortunately, the situation appears to be stuck between the proverbial rock and a hard place. It is unlikely to be a happy ending – for anybody!

The second quarter saw some disconcerting signs of tensions in fixed income markets. Interest rates reached negative values in a number of credit worthy European countries, such as Germany and Switzerland. At approximately the same time, liquidity concerns started to come to the forefront. Yield hungry investors have been bidding up prices on various fixed income securities, especially in the corporate sector. Now questions are being asked as to what would be the exit strategy if investors decided to liquidate or trim their positions. Of course there are always buyers at some price. However trading may become volatile with wildly fluctuating valuations. It’s no wonder that investors are willing to earn a negative return for safeguarding their cash!

The Canadian economy has been flirting with a recession over the course of  the second quarter, although consumer confidence has remained quite positive. The somewhat inconclusive direction of the economy calls into question the right stance for the Bank of Canada to take. A second “pre-emptive” rate cut after this spring’s quarter point cut would be unlikely to have much effect given the already low level of interest rates. Secondly, it may be well worth retaining the dwindling stock of rate cut “ammunition” in case the economic malaise deepens. It is worthwhile to remember that rate cuts not only have an economic impact, but also a psychological one. To cut rates when confidence remains reasonable, is wasting the “shock” effect of such an action. Perhaps the BOC should wait?

The total return performance of the bond market as measured by the FTSE TMX Canada Universe Bond Index for the second quarter was a decline of 1.7%. The benchmark ten-year Government of Canada bond yield increased by 0.3% to end the quarter at 1.7%. Over the course of the quarter the Canadian dollar increased by 1.1 cents from 79.0 cents US to 80.1 cents US.