The Bank of Nova Scotia (TSE:BNS, Market cap 76.58B, P/E 12.59, Div/yield 0.62/3.91, EPS 5.03, Shares outstanding 1.21B,) known to consumers as Scotiabank, closed its fiscal fourth quarter with a 12% leap in profit, chiefly thanks to the acquisition of ING Groep’s Canadian online unit which propelled its domestic consumer lending result to an all-time high. 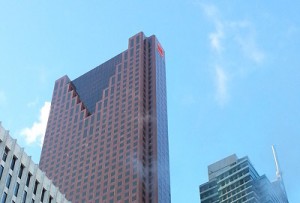 The overall net profit of Canada’s third largest lender by assets stood at C$1.7 billion in the quarter to 31 October, equaling C$1.30 a share. This is an increase from C$1.52 billion or C$1.18 per share the previous year. Adjusted earnings, excluding amortization of intangibles, came in at C$1.31 per share, just short of the average estimate of C$1.32 among analysts polled by Reuters.

For the full fiscal year the Toronto-based bank posted a record-high profit of C$6.7 billion, up from C$6.47 billion a year earlier.

Scotiabank’s consumer-lending profit for the fourth quarter rose 23% to C$593 million, boosted by the C$3.1 billion takeover of ING Direct Canada late in 2012, which added 1.8 million new customers to its client base. The bank said last month that it would rename the unit Tangerine in 2014.

The lender also recorded a 9.7% increase in earnings from its wealth management unit, driven by stronger mutual-fund sales and insurance revenue and the improvement in equity markets, which helped increase assets. Scotiabank also earned C$467 million in income from its international banking division, up 3%, while its global banking and markets unit suffered a 15% dip in income to C$344 million. The lower result was in line with the weaker performance recorded by most local banks in the three month-period. Total revenues gained 11% to C$5.4 billion.

A consistent performer, Scotiabank is well managed, well capitalized and is judiciously employing a well-balanced diversified strategy.  The recent acquisition of ING is already contributing beyond expectations.  International diversification provides some exposure away from potential slower growth prospects in Canada and the US.