Scotiabank closed the quarter with a 6.5% year-on-year increase in its net income to $1.709 billion 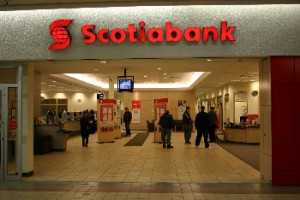 Scotiabank closed the quarter with a 6.5% year-on-year increase in its net income to $1.709 billion

In its latest financial statement the bank said it would hike its dividend by $0.02 per share to $0.64 per quarter, which will apply to shareholders of record as of 1 April 2014 and will be payable starting from 28 April 2014. This increase is the second for the Canadian bank in the last year and brings the five-year compound annual growth rate in its dividend to 5%.

The robust results generated by Scotiabank’s Canadian personal and commercial banking business were the top driver behind its strong quarterly performance, with 7% annual growth in net income to $575 million. Its international banking business, meanwhile, reported a 2% drop in net earnings to $401 million, as revenues in its top foreign market, Latin America, were offset by lower net interest margins, a decline in contributions from associated corporations and an increase in credit loss provisions and expenses.