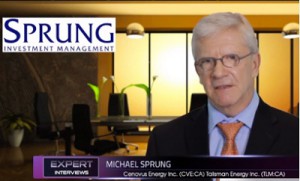 Mark Thorburn:        Welcome Michael! We understand you are a value investor. Which sectors in the market do you think represent the greatest value at this time?

Michael Sprung:       Well, I think for longer term investors like our clients mostly are, we are finding more value now actually in the resource stocks which have lagged so much over the last year. We have a position where the commodities have had such a terrible year in Canada as a whole has lagged as a result.

So, I would say overall we are finding more value in energy and materials than we are anywhere else at this point in time.

Mark Thorburn:        Are there any particular stocks that you like that you could tell our investor audience about?

Michael Sprung:       Sure, in the energy side we like Cenovus Energy  (CVE) We can see that under various pricing scenarios going forward, they are going to have positive free cash flow commencing in the next year or so, and expansion of production there is going to be quite impressive and we really like the pricing on that model right at the moment. Another one that may be is a little bit more contrarian is Talisman (TLM) which of course has got new management as of over the last year and they have undergone a new strategic initiative.

Basically whether they sell the assets in whole or in part or develop some and sell others, it’s really going to begin to surface value overtime. Now what’s holding the value down of course right at the moment is the fact that oil and gas prices have been a little bit depressed, but we believe that the parts in this case are worth much more than the whole.

Mark Thorburn:        What criteria do you use when deciding whether or not to buy a particular stock?

Michael Sprung:       Well, mostly what we are looking for companies that have got the financial wherewithal too, withstand a period of less than optimal conditions. So we are looking for strong balance sheets, strong management and historically we look at what is this company been capable of earning, what has been the return on equity traditionally. Whether or not they might get back to that level, we try to assess over the next business cycle as we see it under various scenarios,      what is the normalized ROE going forward and what are you paying for that today, and then we compare that with what the market is asking for it and decide whether or not we think it’s a buy.

Mark Thorburn:        The last time we spoke, you were concerned that North American stock markets were becoming overvalued. Do you still feel that way?

Michael Sprung:       Well, we feel that way more so about the US market than we do about the Canadian. I mean we have a situation for the year today, the Canadian markets up a little over 11% on a total return basis whereas S&P 500 is close to 28%, the wrestle, the broader index is well over 30. And this has been on the face of declining commodity prices over the year which is what has held the Canadian market back.

We do believe that there are positive signs to be seen in the US in terms of gains and employment slow, better housing conditions. But overall we think that the market is certainly well ahead of where it, would be given the economy today.

Mark Thorburn:        You previously mentioned that you like commodities, so which commodities do you favour?

Mark Thorburn:        So, what is your outlook for the Canadian and US economies?

Michael Sprung:       Well, that depends a lot on what happens in the economy in general going forward, what we have had is a very tepid recoveries today and going forward it’s going to be a function of is there anything that’s really going to upset The applecart whether that would be a geopolitical incident or otherwise.

But you know we have seen reason for solid optimism lately. The downward slowing of growth in China seems to have obeyed it to some extent. In fact after a number of years we are beginning to see a little bit more stability in the European Market and as we are saying, we are seeing some positive signs in the US.

But we think that generally once the economy has the legs under it to stand on its own two feet, that shouldn’t be as big of worry.

Mark Thorburn:        Do you currently see better investment opportunities outside of North America?

Michael Sprung:       As a matter of fact, I think that we see better investment opportunities in Canada in particular than we have seen in some time. Canada has lagged the global markets to the extent that I think pent up demand for commodities when economies begin to pick up a gain will cause the Canadian market to participate as well are better than most of the global markets.

Mark Thorburn:        Thanks for taking the time for the interview, Michael.

You can also view it at the Financial Post