The bus and motor coach manufacturer has signed a contract for up to 75 Xcelsior heavy-duty transit buses with The Comet, formerly known as the Central Midlands Regional Transit Authority (CMRTA), located in Columbia, South Carolina. 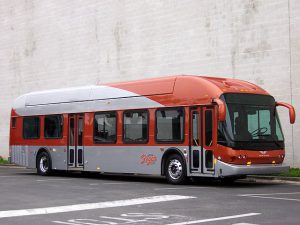 This five-year deal includes a firm order for eight Xcelsior clean diesel 35-foot buses, plus options to purchase another 67 Xcelsior buses of the same size, powered by either clean diesel or compressed natural gas.

New Flyer also revealed that its subsidiary Motor Coach Industries (MCI) has received notice from New Jersey Transit (NJT) that “requires an immediate and orderly shutdown of all ongoing work” under a contract to build commuter coaches.

This contract was signed in November 2015 and included a firm order for three commuter coaches and options for an additional 1,219 over six years.

MCI delivered the first three coaches, which successfully passed the in-service testing and evaluation phase, and received a Notice to Proceed in May 2016 for the first year’s production of 184 commuter coaches. Of these, 142 were to be delivered before the end of 2016.

Recently, however, a funding shortfall has emptied the state’s Transportation Trust Fund Account (TTFA) and all ongoing work financed by TTFA funds is being postponed.

“As of today, MCI has delivered five coaches to NJT with an additional 76 currently in various stages of production or completed and in transit,” said Paul Soubry, president and CEO of New Flyer.

“MCI will shortly commence its annual three-week summer shutdown and we will synchronize an orderly shutdown of NJT production to coincide with it and we hope this will provide sufficient time for the funding situation to be resolved.”

The 61 commuter coaches that have not yet commenced production represent just under 2% of New Flyer’s manufacturing schedule for 2016. The company said it cannot yet predict whether the disruption will lead to an adjustment of its annual production guidance.