“We can ignore reality, but we cannot ignore the consequences of ignoring reality.”- Ayn Rand

“Recognizing risk often starts with understanding when investors are paying it too little heed.”- Howard Marks

Since the inauguration on January 20, we have all been inundated by media reports on the first one hundred days of the Trump administration. While stock market participants entered the year with apparently high expectations, towards the end of this 90 day quarter there has been wavering of sentiment as the realization that not all of Trump’s campaign promises are likely to be delivered. 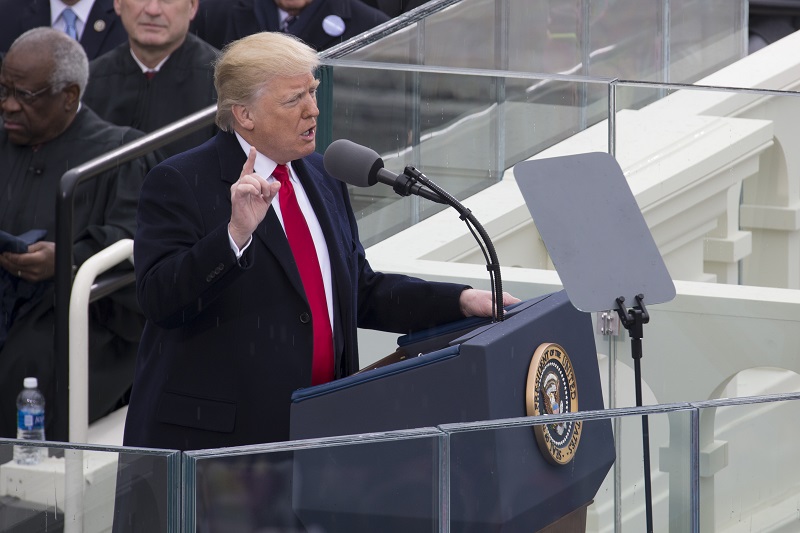 Market sentiment has wavered with the realization that not all of Trump's campaign promises are likely to be delivered. (DoD photo by U.S. Marine Corps Lance Cpl. Cristian L. Ricardo)

North American stock markets finished the quarter in positive territory.  The enthusiasm in the US propelled the S&P 500 up 5.5% (6.1% in US dollars) as investors focused on the prospects of lower taxes and reduced regulation that were the cornerstones of the Trump campaign. The Canadian market was not as robust. Weak energy prices and faltering economic prospects in Alberta and Ontario weighed on the enthusiasm of investors in Canada. The Toronto Stock Exchange recorded an increase of 2.4% in the quarter lead by Utilities (7.3%), Consumer Discretionary (7.0%) and Information Technology (7.0%). Health Care (-10.0%) and Energy (-5.5%) were the only sectors with negative performance.

MARKET COMMENTARY : Can the Trump Administration Deliver on Campaign Promises?

Contrary to the predictions of the pundits in the media, the US stock market entered a period of euphoria following the US presidential election in November. Expectations appeared to be focused on the promises made during the campaign with respect to health care reform, tax reductions, regulatory relief and massive government spending programs on infrastructure and the military. That sentiment persisted through the first two months of 2017. In March, political reality began to sink in as discussions on health care reform began in earnest and the administration planned to present a Bill on March 23rd. As support for the legislation began to break down, confidence in the Trump administration’s ability to garner approval for their agenda began to falter. As market participants focused on these deliberations, the S&P 500 gave up a third of the gains achieved in the first two months of the year.

In Canada, investor sentiment was more muted. The Toronto Stock Exchange participated with the US market post the election until year-end. Thereafter, Canadian investors became concerned as energy prices came under pressure and fears of the impending NAFTA trade negotiations came to the fore with the resurgence of the “age old” softwood lumber dispute. Investors felt some relief as the federal budget was less dramatic than feared and did not contain any increase in capital gains taxes that had been rumoured. The release of GDP economic indicators stronger that expectations were corroborated by the fact that the Canadian dollar was able to modestly appreciate against its US counterpart by 0.8%.

European stock markets were reflecting increasing optimism in the economy as factories exhibited greater activity. The positive economic trends superceded investors’ anxieties over the election in the Netherlands where fears that the populist candidate could have prevailed, but didn’t. Upcoming elections in France and Germany will also test those anxieties as populist candidates in both countries are doing well in the advance polls. While some positive economic indicators are a relief, serious financial constraints and immigration issues will continue to influence investors’ sentiment.

The Asian economies also reported some positive indications that factories were busier. Exports from Taiwan, South Korea and China were up significantly compared with a year ago. Japan increased its outlook for economic growth over the coming year.

There are certainly reasons to be optimistic on the global economy. Orders for capital equipment are on the rise and employment has been improving. It has been almost ten years since the financial crisis of 2008. Climbing out of the financial abyss has been slow and painful for many as adjustments have taken time to work through the economy, as is often the case following financial crisis. The result has been reflected by the increase in populist politics as evidenced by the vote for Brexit and the election of Donald Trump. While the Netherlands managed to stem the populist tide, there are still the elections in France and Germany ahead.

Politics and economic cycles are often out of sync. The politics of populism are not as accommodating to the concepts of free trade and globilization that have sown the seeds for the current recovery; yet those very politicians may point to the recovery and take credit where none is due. In fact they may sow the seeds for the next downturn.

There remain many geopolitical and economic issues yet to be resolved: North Korea, Russia and the Ukraine, Syria, debts in China, Italy and other nations. Valuations in the stock market have reached high levels on the basis of the favourable economic trends continuing. Perhaps it is not wise to ignore the other issues.

We remain cautious in the current environment.

You can view and download a copy of our complete market commentary here: