House Prices – the long-term trend for house prices has indeed been up.

The recent ROB series entitled ‘Debt: Canada’s borrowing binge’ explores the risks associated rising household debt in Canada. One risk associated with our addiction to cheap money is its effect on home prices. Low interest rates have encouraged homebuyers to take on larger mortgages. That has led to a dramatic rise in home prices over the past 20 years. The wealth effect caused by rising home prices has also encouraged homeowners to take on additional debt via home equity lines of credit.

There has been much debate as to whether house prices in Canada, particularly in Toronto and Vancouver, are over-valued and if so, by how much. Many wonder whether this purported bubble is likely to burst in the near future. The reality is that there is no way to know if a bubble in house prices, or the prices of any asset class, exists until it actually bursts.

Given that uncertainty, what do we know about house prices? Looking at Toronto house prices from 1954 to 2014, the first thing that we can say is that the long-term trend for house prices has indeed been up. (See the grey trend line in the chart.) 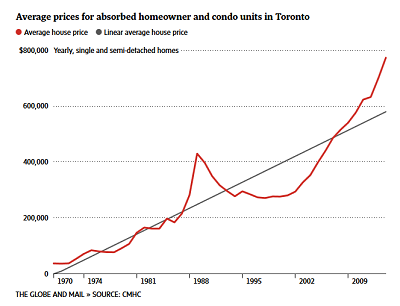 Why does this happen? Anyone who has a memory of current events, will likely recall that during the mid-70’s the oil crisis wreaked economic havoc, while the sell-off at the end of the 80’s was caused by the US Federal Reserve ratcheting up interest rates to slay inflation.

But there is a more general reason why the prices of houses and other assets tend rise and fall over time. It’s called reversion to the mean, (often mistakenly called regression to the mean.) Reversion to the mean says that extreme values are more likely to be followed by less extreme values. Think of it this way: performance that is well above average usually doesn’t stay there forever; it typically comes back to earth. Performance that is well below average often gets better. If you’re a golfer, you have likely experienced this phenomenon.

How can we use this information to guide decision about housing?

Most people who are considering buying a house look at the rising prices, assume that they will continue to rise. They believe that they must buy now before they rise even higher. In reality, periods of rapid house price appreciation are eventually followed by extended periods of declining prices, (see the red line in the chart above.) Prospective buyers may be better off to rent now and wait for lower prices. The Economist recently reported that Canadian house price are 89% overvalued compared to rents. That means it is significantly cheaper to rent than own.  Potential homebuyers should likely consider the option of continuing to rent and save a larger portion of their income.

For many older Canadians, their home is there single largest asset. As we age, many of us sell our homes and use the proceeds to help fund our retirement. Knowing that we will need to sell our homes at some future date, we look at the rising house prices and assume that they will continue to rise. We believe that we will benefit from deferring the decision to sell. That could be a huge mistake: if you choose not to sell your house in the near-term and prices decline, a health or financial crisis could force you to sell at a much lower price.

Buying and selling a home is the biggest financial decision most of us are likely to make in our lifetime. Our behavioural biases mean that we tend to make decision based on recent data that fits our view of events, rather than incorporating long-term historical data. We base our decisions on the fact that house prices have risen significantly in recent years and ignore that fact that they declined by 30% in the 1990’s. It’s different this time, right?

This post was also published in the Globe and Mail Report on Business Comment page. You can read it here>