George Weston restructuring includes the acquisition of Shoppers Drug Mart by its unit Loblaw and the creation of a real estate investment trust.

George Weston Limited (TSE:WN, Mkt cap 10.29B, P/E  17.77, Div/yield 0.41/2.06, EPS 4.53, Shares 127.90M), Canada’s largest food processing and distribution company, has reported an increase in its fourth-quarter profit to $232 million from $112 million. During the quarter, the company continued with its restructuring, including the acquisition of Shoppers Drug Mart by its unit Loblaw and the creation of a real estate investment trust.

Earnings benefited from a lower income tax rate but the weaker performance of Weston Foods and Loblaw Companies Ltd partially offset these gains, the company said. 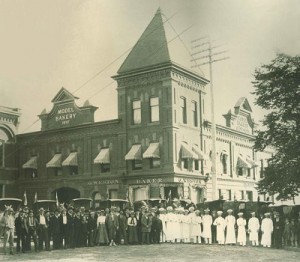 George Weston restructuring includes the acquisition of Shoppers Drug Mart by its unit Loblaw and the creation of a REIT.

George Weston also recorded an improvement in adjusted basic net earnings per share, which advanced to $1.11 in October-December 2013 from $1 in the same quarter a year ago, exceeding market forecasts by $0.14. During the period the company incurred a $32 million restructuring charge associated with the reduction of some 275 store-support positions.

Basic net earnings came in at $1.37, an increase from $0.41, thanks to the fair value adjustment of the sale agreement for 9.6 million Loblaw common shares and other items.

Revenues improved to $7.9 billion in the quarter from $7.7 billion a year earlier, with Weston Foods sales rising to $413 million from $399 million last year and Loblaw sales up 2.3% to $7.6 billion. Revenues generated by the food retailer, in particular, were positively impacted by the timing of the Thanksgiving holiday but were hindered by the ice storm that battered Eastern Canada, as well as by a strike in Western Canada.

This year, the company expects to achieve modest sales growth but to see a drop in adjusted operating income as a result of continued investments, including plant start-up costs and marketing and innovation initiatives.