“Globalization is the process by which markets integrate worldwide.” ~ Michael Spence

If the first quarter is a harbinger of political turbulence to come, then we are looking forward to interesting times! The Trump presidency has had a rocky start with changes in tack regarding appointments and implementation of promised reforms. While new administrations do tend to have their challenges as they settle into their roles, the Trump administration seems to have had more than their share. It can only be hoped that they will find their "sea legs" soon. 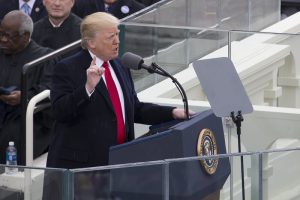 Market sentiment has wavered with the realization that not all of Trump&rsquo;s campaign promises are likely to be delivered. (DoD photo by U.S. Marine Corps Lance Cpl. Cristian L. Ricardo)

Market sentiment has wavered with the realization that not all of Trump&rsquo;s campaign promises are likely to be delivered. (DoD photo by U.S. Marine Corps Lance Cpl. Cristian L. Ricardo)[/caption]While the chaos swirling around the White House continues, the Federal Reserve (Fed) has finally pulled the trigger on the expected rate hike in the first quarter, likely the first of a number. The President may not be a fan of Chairman Yellen, however having a sober, low key person in charge at the Fed provides some assurance to investors that there is some continuity in policies that are being carried out.

The US government's large spending program is likely to be inflationary. During a period  when economic growth and labour markets have continued to firm, this growth will give the Fed ample reason to continue their rate hike program. As the Fed has stated, any action will continue to depend on subsequent economic readings.

Foreign buyers in turn have been scaling back their purchases of US Treasury securities as the expected rate hikes and the potentially inflationary actions of the government are likely to put pressure on bond prices.

Major questions remain regarding Europe. The combination of upcoming elections in France and Germany, terrorist attacks and growth in populist political movements all add to the uncertainty. As we have stated in the past, there continue to be overhanging issues, primarily related to debt and borrowing in various countries. Political uncertainty regarding the future of the European Union and the consequent stability of the Euro will make investors that much more reluctant to participate in various refinancing attempts. Weakening of the Union and any further departures along the lines of Brexit would only increase the pressure on Germany to act as a backstop to the Euro denominated debt; a situation that will have its limits!

The total return performance of the bond market as measured by the FTSE TMX Canada Universe Bond Index for the first quarter was an increase of 1.2%. 91-day Treasury bills returned 0.1% over the same period. The benchmark ten-year Government of Canada bond yield declined 0.09% over the course of the quarter to end with a 1.63% yield at quarter-end. Over the course of the quarter the Canadian dollar appreciated by 0.7 cents from 74.5 cents US to 75.2 cents US.

You can view and download our complete quarterly commentary here: