Federal Reserve – US Economy Poised For Stronger Growth Next Year 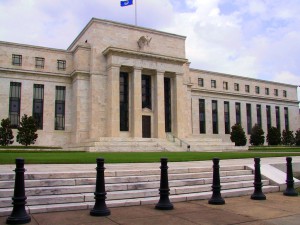 Federal Reserve – US Economy Poised For Stronger Growth Next Year

Economic data released in the last couple of weeks pointed to reassuring increases in employment, new factory orders from overseas and consumer sentiment. Growth in state and local government spending after several years of sharp contraction is a good indicator.

Economists now expect the country’s economy to expand by 3% in 2014, a substantial improvement from the average annual rate of 2% seen in the last four and a half years. The stronger improvement would propel job growth to 250,000 a month, resulting in 60,000 more people finding a job each month compared with the past year, said Robert Kleinhenz, chief economist for the Los Angeles County Economic Development Corp. The pick-up in hiring could also bring the jobless rate down to 6% in 2014, he said.

Some analysts are even coming up with bolder economic predictions for 2014, based on hopes that the bipartisan two-year budget bill approved recently by the House would give a further boost to the economy. The deal is seen not only to unleash spending in the short-term, but also to prop up business confidence that has been eroded by the federal government’s persistent stand-offs over the budget and partisan arguments.

Despite improvements in both the external and internal environment, there are still challenges that are yet to be addressed, the most significant one being interest rates. Rates have been on the rise since the summer and seem set to trend higher as the Federal Reserve starts to reduce its $85 billion-a-month bond-buying program, a scheme designed to support a stronger economic recovery.

75% of Canada’s exports go to the US. An up-tick in the US economy will significantly boost growth here. This should be positive for Canadian markets, particularly the resource sector.