Greg Bonnell:           Shares in energy producer EnCana, are getting a lift today on an announced plan to shift the company’s focus away from natural gas. The plan involves cutting EnCana’s workforce by 20% and slashing its dividend.

EnCana has been hit hard by slumping natural gas prices. One shareholder who likes the plan is Michael Sprung. He is the President of Sprung Investment Management, and he joins us now.

Michael, thanks so much for coming in and chatting with us about this. Let’s talk about natural gas in the first place. 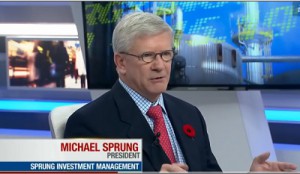 Michael Sprung on EnCana: ” I think the longer term outlook for this stock could be quite positive.”

Greg Bonnell:           Obviously as an investor, you must have been concerned about the price?

Michael Sprung:        Oh yes. I am a much happier shareholder in EnCana today than I was, but I mean, longer term I am a big believer in the outlook for natural gas. It is a much cleaner fuel to burn. I think over time more-and-more industry and power generation is going to come from natural gas.

Despite all that we are seeing coming out from shale formations and so on, I think in the longer term we’re going to see the price of natural gas go up. And so, it was really just a function of how long was that going to take, and that was one of the reasons we were holding EnCana up till now, it being one of the largest producers in North America.

It had the wherewithal to weigh it out a period of which you never know when it’s going to change in this industry.

Amber Kanwar:        Before 2012 this was a stock that had a habit of trading above $30. Now we’re trading at roughly 19 unchanged. Where do you see the stock going in the long term?

Michael Sprung:        Well, it’s going to be a function of how successful this strategy is in playing out. Certainly the fact that they are going to be focusing on liquids is taken in today’s market as being positive, liquid pricing is much more better higher margins. If they can in fact generate cash flow, almost 50-50 with liquids in 5 years time that would be tremendous, and in the meantime, you could even see natural gas prices improving.

For a long time they were lagging because 90% of production was perceived to be natural gas, and so that’s quite a dramatic shift in the kind of company that you are investing in. The emphasis on cost cutting too, they were again, perceived as perhaps as being one of the — not the highest cost producer but a higher than average cost producer.

I think this focus is going to bring them into line a lot more. So I think the longer term outlook for this stock could be quite positive and I see the downside as being relatively limited. So it’s a good trade-off that we have here.

Michael Sprung:        I think if anything, it just brings some relief. It relieves some of the funding concerns that they might have, but it’s not that big a deal. The estimates I’ve seen on the asset value of Clearwater are around $2 billion.

So they are going to retain a portion of it. So say it brings in a dollar or two — between $1 and $2 a share, depending on how much they keep. That’s not such a big deal. I think the big deal is really cutting the dividend, reallocating that capital back into the operations. I think that’s what people were really expecting. They just didn’t know how much. The last time I was on, I called, they asked me how much I thought they would cut the dividend. I said, well, I think it’ll either be 50% or all of it and they’ve come up with somewhat of a compromise. But I think it’s a good thing, that alone is going to generate in the neighbourhood of $390 million a year.

So again, going forward it relieves a lot of the funding concerns for capex as they go more-and-more from natural gas into liquids.

Amber Kanwar:        Do you own the same because you are bullish about the underlying commodity space that they are in or because this company specifically and their ability to turn itself around from an operations perspective?

Michael Sprung:        I think it was more of this company specifically and I think if you go back, before the change in management here that has occurred, it was because the properties that they own are such good and desired properties whether it’s in the Montney, or the Duverney, or the San Juan Basin etc., the five core areas where they are going to concentrate on are very rich, high potential areas. So I think there is potentially good positive impact coming from that.