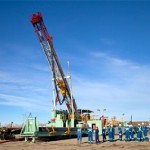 According to the insiders, the company is in advanced talks with private equity firms Carlyle Group LP and NGP Energy Capital Management LLC over the sale of the asset, which is one of the largest natural gas fields in the United States. Last year Encana extracted 323 million cubic feet of gas and 4,700 barrels of gas liquids a day after royalties. The volumes, however, were less than those reported the previous year as the company curtailed spending on drilling activities at the field.

The sale is part of the company’s plan to move its focus away from natural gas to liquids-rich natural gas and oil, which have been generating higher value. When announcing its shake-up plan in 2013, Encana said it would concentrate on five major regions in Canada and the US, down from around 20 previously. The company has already announced plans to allocate 75% of its 2014 budget, pegged at between $2.4 billion and $2.5 billion, on the Montney and Duvernay liquids-rich gas plays in Canada, the DJ basin, San Juan basin and the Tuscaloosa marine shale in the US, the Globe and Mail said.

When contacted by the Wall Street Journal, Encana spokesman Jay Averill said that the company was “testing the market in different areas,” suggesting that divestments could be among the options considered.

Encana is currently close to completing the spin-off of its Clearwater royalty arm in Western Canada, which collects fees and royalties on Encana land used by other companies.