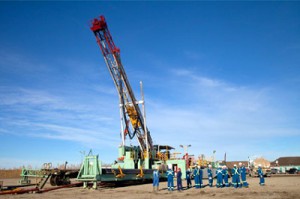 Encana may reconsider its plan to sell the Bighorn operating area, located within the Grande Cache region in west central Alberta.

Encana is looking for a buyer for properties spanning approximately 480,000 gross acres (194,250 hectares) which have the capacity to produce the equivalent of around 61,500 barrels of oil per day, 79% of which is gas, the sources said on condition of anonymity. Encana’s website says that the main producing properties in the Bighorn operating area are Kakwa, Resthaven and Red Rock, located within the Grande Cache region.

The reason behind Encana’s decision to divest the assets is the steep increase in gas prices, which hit a five-year record of $6.40 per million British thermal units on the New York Mercantile Exchange last week as a result of the extremely severe weather in eastern United States, according to Bloomberg. Earlier, Encana’s chief executive Doug Suttles stated that his company was examining the possibility of shedding assets located outside the five main regions on which the producer is currently concentrating.

In a conference call in January, Suttles hinted that Bighorn was “not a growth area” at present and Encana would seek to ensure operating efficiencies in the area where it has already slashed investment. In an interview with Bloomberg earlier this month, the CEO said that the company was gauging market mood on several assets and was already seeing investors with capital willing to invest, without naming the assets it was seeking to sell.

According to market experts, the assets could draw offers of between C$2 billion and C$2.5 billion and could be valued at as much as C$4 billion if Encana decides to sell the properties separately. Exxon Mobil Corp is seen as one of the possible bidders following the sale of Celtic Exploration Ltd in 2013.

Gas for next-month delivery surged as much as 42 percent to $6.493 per million British thermal units on Feb. 24. This was the highest price since Dec. 2, 2008, up from a low of $4.563 on Feb. 10. However, prices are poised to end February 8.7 percent lower for the month at $4.511 per million BTU. Given these declines, Encana management may be re-evaluating their position and expected price.