Cenovus to improve operating efficiency at its Foster Creek operation 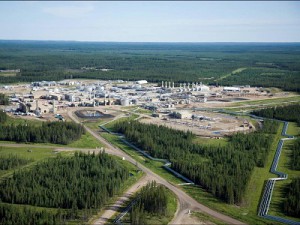 Cenovus has taken steps to improve Foster Creek’s SOR ratio to between 2.6 and 3.0 in 2014

The project in northeastern Alberta has started to suck up more steam, which has resulted in an increase in its steam-to-oil-ratio (SOR), measuring the volume of steam used to produce a barrel of oil in steam-assisted gravity drainage (SAGD) projects, to 2.5 in 2013 from 2.2 the previous year. The output from the site has also declined, registering an 8% year-on-year fall to 53,000 barrels per day. According to Ferguson, the project is capable of producing oil in excess of 300,000 barrels a day.

Cenovus has also found that steam chambers at Foster Creek’s wells have started to merge, which has further hampered its efficiency. In order to overcome these limitations the company will make changes to the way starts planned expansions at the field. The measures will include leaving steam to circulate for a longer period before starting oil production. The changes are expected to lift the SOR ratio to between 2.6 and 3.0 in 2014 but Cenovus believes that they will result in long-term production benefits that outweigh the costs of a temporarily higher SOR.

Also on Thursday, the oil producer reported a $212 million operating profit for the fourth quarter of 2013, or $0.28 per share, recovering from a loss of $188 million or $0.25 per share a year earlier. Despite the improvement, the result was below the mean forecast for earnings of $0.36 per share among analysts polled by Thomson Reuters.  We view the deferment of expansion phases at Foster Creek will ultimately benefit operations as more data will enable greater optimization of the resource.

Cenovus also announced a 10% increase in its quarterly dividend to $0.2662 per share.