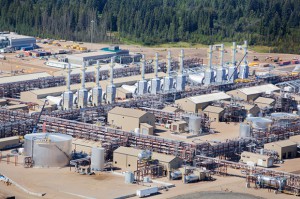 The Calgary-based company announced on Thursday that it plans to restart construction on the phase G expansion at Christina Lake in northeast Alberta in the first half of 2017.

Since the project was deferred in late 2014, Cenovus has reworked the construction plan and rebid contracts, reducing the capital cost by more than $500m. The company said it anticipates that the expansion can be completed with go-forward capital investment of between $16,000 and $18,000 per flowing barrel.

The Christina Lake expansion is currently about 20% complete and has an approved design capacity of 50,000 barrels per day (bbls/d) gross. First oil from the expansion is expected in the second half of 2019.

Cenovus’s overall 2017 budget reveals that the company plans to invest a total of between $1.2bn and $1.4bn over the course of the year. That’s a 24% increase compared with its forecast capital spending for 2016.

The company intends to increase its total oil production in 2017 by 14% compared with its forecast average production for 2016.

As well as Christina Lake, the budget includes capital to invest in a targeted drilling program on the Palliser Block in southern Alberta. To date, the company has identified approximately 700 drilling locations with high-return potential. Cenovus plans to spend approximately $160m in 2017 to drill about 50 horizontal development wells and 60 stratigraphic wells at Palliser.

“We intend to pursue some exciting opportunities on the Palliser Block to generate short-cycle cash flow to support continued growth in our oil sands assets, which is consistent with our long-standing conventional strategy,” explained Cenovus president and CEO Brian Ferguson. “Our investment plans for Palliser and Christina Lake phase G far exceed our internal rate of return threshold.”

Cenovus Energy Inc (TSE:CVE) is a Calgary, Alberta based oil company. Cenovus in the business of developing, producing and marketing crude oil, natural gas liquids (NGLs) and natural gas in Canada with refining operations in the United States. It operates four business segments: Oil Sands segment, engaged in the development and production of Cenovus’s bitumen assets at Foster Creek, Christina Lake and Narrows Lake, as well as projects in the early-stages of development, such as Grand Rapids and Telephone Lake, and Athabasca natural gas assets; Conventional segment, engaged in the development and production of conventional crude oil, NGLs and natural gas in Alberta and Saskatchewan, including the heavy oil assets at Pelican Lake; Refining and Marketing segment, engaged in the transporting, selling and refining crude oil into petroleum and chemical products, and Corporate and Eliminations segment.