Canadian National Railway Company (TSE:CNR, Market cap 49.27B, P/E 19.21, Div/yield 0.25/1.69, EPS 3.09,Shares outstanding 830.52M,) the country’s top railway operator, ended its fourth quarter on a high note. Earnings were just short of analysts’ forecasts as the harsh winter weather took its toll on operations in December. The company’s volumes and revenues for the full year touched record-high levels. It also announced a 16% increase in its quarterly dividend amid expectations for further growth in 2014. 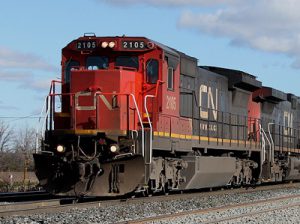 Canadian National Railway ended its fourth quarter on a high note, with earnings just short of analysts’ forecasts as the harsh winter weather took its toll on operations in December.

The railway’s chief executive, Claude Mongeau, commented that most of its network had been severely impacted by the extreme weather conditions this winter, which made it impossible for the company to meet the underlying demand. Nevertheless, the results proved to be “solid” and the fourth quarter was a “good finish” to the year, he said during a conference call.

The company said it would stick to its previous guidance for double-digit growth in its adjusted diluted earnings per share (EPS) this year, expecting the figure to be above the C$3.06 recorded in 2013, and for free cash flow of between C$1.6 billion and C$1.7 billion. The railway also announced plans for capital expenditure of C$2.1 billion this year, up from C$2 billion in 2013.

Talks with CNR’s union representing the conductors have not been resolved and a strike is more likely given labour’s desire to participate in the recent improvements in the company’s profitability.  The stock has appreciated significantly in the past year.  We would not be buyers at current levels.