Canada Stockwatch – TransCanada Corporation (TSE:TRP, Mkt cap 39.28B, P/E 22.58, Div/yield 0.52/3.75, EPS 2.45, Shares 708.66M) is under investigation by Canada’s energy regulator following up to a dozen allegations that it has breached natural gas pipeline safety code regulations, according to documents seen by Reuters. 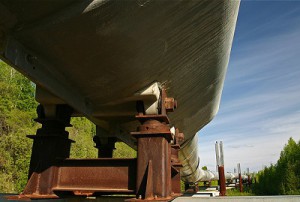 Canada Stockwatch – TransCanada Under The Regulator’s Gaze Once Again

The National Energy Board (NEB) and TransCanada have both confirmed that an investigation is in process, but they refused to give more than a few details on what it comprises.

However, documents reviewed by Reuters reveal that the allegations include faulty or delayed repairs, sloppy welding work and a failure to report key issues to the regulator.

It’s not the first time Canada’s second-largest pipeline company has come under scrutiny from the regulator, with complaints by a whistleblower in 2012 provoking a major NEB audit, the results of which confirmed some of the former employee’s criticisms.

TransCanada officials were tight-lipped on the true extent of the recent allegations, but noted that someone previously raised them within the company, prompting an internal investigation that is on-going.

Spokesman Davis Sheremata said that the company is cooperating fully with the regulator, but that it did not see any of the allegations representing either an immediate or long-term threat to the public or its assets.

“We make it clear to all of our staff and contractors that we will not tolerate anything that undermines the safety and reliability of our facilities,” he said.

In a letter sent by the regulator to the whistleblower last month, the NEB said that it had previous knowledge of the allegations and was taking them “very seriously,” adding that it had not noted any immediate safety concerns.

The whistleblower, a former TransCanada employee, allowed Reuters to view the letter, but asked not to be identified.