Canada Stockwatch – TD Bank, formally known as Toronto-Dominion Bank (TSE:TD, Mkt cap 100.21B, P/E 13.04, Div/yield 0.51/3.77, EPS 4.15, Shares 1.85B) has a reputation for being one of Canada’s most conservative banks, but the arrival of Bharat Masrani as chief executive might see it shed its risk-averse approach, analysts have suggested. 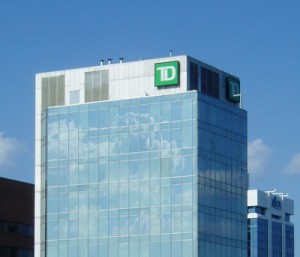 As the Financial Post reports, rival banks Royal Bank of Canada and Bank of Nova Scotia have both made significant moves recently, with the former announcing a $5.4 billion deal to buy Los Angeles-based City National Corp. Bank of Nova Scotia, meanwhile, took a fourth-quarter hit of $451 million as it set about restructuring.

Whilst TD Bank appears to be taking more tentative steps towards change, analysts are noticing a definite widening of its risk appetite, which Masrani suggests is indicative of the industry.

“We are in the risk-taking business, that’s what we do for a living,” said the bank’s former chief risk officer in his first annual meeting as TD’s CEO.

Peter Routledge, a financial services analyst at National Bank Financial, told the newspaper how Masrani has already had an influence on the bank’s corporate lending book since his appointment in November.

Routledge suggested that a bit more risk could yield welcome returns for Canada’s second-largest bank, adding that he’d like to see even more risk implemented in its strategy going forward.

Masrani hinted that this could happen sooner rather than later, with TD’s head of capital markets, Bob Dorrance, being encouraged to expand the TD Securities and wholesale banking franchise as much as possible, which could generate returns in the region of 15% to 20%.

However, Masrani cautioned: “Taking on bad risk is unforgiving for a long time.”
Canada Stockwatch – TD Bank’s net income grew by 1.56%, year over year, to $1.09 per share during the most recently completed quarter.

We believe successful investors must challenge the market consensus by maintaining an independent point of view.