CAE  is broadening its global reach and satisfying demand in Asia, the Middle East and Russia

Simulation equipment devices maker CAE Inc has sealed contracts for the sale of five full-flight simulators, other devices and related services with a combined list price to the tune of $90 million, the Montreal-based company said last week. 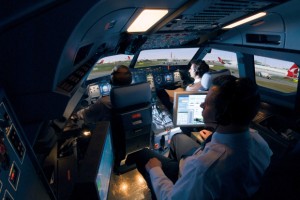 CAE is broadening its global reach and satisfying demand in Asia, the Middle East and Russia.

A simulator for the new Boeing 787 passenger jet, also known as the Dreamliner, was ordered by the Zhuhai Flight Training Center in China. It is the center’s first simulator for this particular aircraft type and its 27th built by CAE. The new simulator will be used for training Chinese and Asian operators.

The third order came from the Emirates-CAE Flight Training in Dubai, which bought a Global Vision simulator that will be available for training by the end of 2014. This is the 16th CAE simulator to be installed in Dubai, the company said. The flight training facility is a joint venture between CAE and the Dubai-based airline.

Another simulator for the Boeing 787 was ordered by an unnamed customer from North America and one helicopter full-light simulator went to another unidentified client.

The deals confirm the company’s success in broadening its global reach and satisfying demand in Asia, the Middle East and Russia, as well as its improving position in North America. Aircraft renewals in the civil aviation sector will continue to pull demand for CAE’s products and services. Healthcare, although small, is showing early signs of attracting business.