Bond Market – “There are two fools in every market: one asks too little, one asks too much.” – Russian proverb

After the lacklustre performance of the bond market in 2013, where the Canadian market lost 1.2%, the first quarter saw a turnaround with the market making up for more than the whole previous year’s loss in less than a month.

However all is not as it seems. Much of the rally can be ascribed to external factors. Wobbles in emerging markets combined with political uncertainty developing in the Ukraine and Crimea resulted in the usual flight to quality trade which provided a boost to North American bond markets. 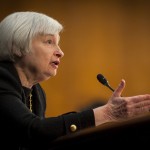 Despite these external factors, which did not even rate a mention in the news release, the January Federal Reserve Open Market Committee (FOMC) meeting concluded with a unanimous vote for a continuation of a reduction in asset purchases, the now well known “taper”.  Similarly, reference to economic factors was largely positive, a message that overall would argue for higher rates in the longer run.

Her comments regarding the reduction in the Fed’s ongoing purchase of securities and the likely increase in interest rates were by no means news. Nevertheless, the markets’ eagle eye focused on her words that interest rates may be rising six months after the asset purchases have been phased out. While in its essence this wasn’t news, however the indication of the defined “six months” sent the market for a tumble.

In our view this microscopic parsing of statements, while par for the course, is missing the point. The Yellen era is unlikely to bring fundamental change to the policy direction of the Federal Reserve. Having said this, the likely direction of interest rates is upwards, depending, as we had said before, on external factors, be they economic or geopolitical.

The total return performance of the bond market as measured by the DEX Universe Index for the first quarter was an increase of 2.8%. The benchmark ten-year Government of Canada bond yield decreased by 0.3%, to 2.5%.

You can read and/or download our complete commentary below: