Interested investors may wish to pursue a greater understanding of investment fundamentals. The following investing books have made a major contribution to the investment community and have been instrumental in the development of the investment philosophy employed at Sprung Investment Management 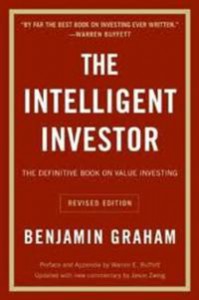 The Intelligent Investor: The Definitive Book on Value Investing

First published in 1949, this book has undergone several reprinting. Copies of the “classic” anniversary edition are also available. Benjamin Graham is the father of the value investing school of thought. Warren Buffet is perhaps the best known of his disciples. Many of the concepts and rules-of-thumb developed by Graham are just as applicable today as they were sixty years ago.

2. Common Stocks and Uncommon Profits
by Phillip Fisher; John Wiley & Sons, Incorporated, May 1996:
What Benjamin Graham was to the school of value investing, Phillip Fisher was to the school of growth investing. Originally published in 1958, Fisher favoured companies that were low cost producers within their respective industries and had long term growth prospects. Many of his ideas are as applicable to value investors as to growth investors. He was one of the pioneers of considering the qualitative factors such as the quality of management, opinions of customers and suppliers, etc.

3. Extraordinary Popular Delusions and The Madness of Crowds
by Charles Mackay; Three Rivers Press, July 1995:
“Tulipmania”, “The South Sea Bubble” and many more financial crises are covered in this fascinating book that covers many of the manias that have befallen investors over the years. Anyone reading this book will certainly be reminded on the “Tech Boom and Bust” of the late 1990’s and early 2000’s. Somewhat of an argument for contrarian investing, but most definitely and caution against running with the heard!

4. Investment Policy: How to Win the Losers Game
by Charles Ellis; Irwin Professional Publishing, January 1985:
Charles Ellis has been a driving force for the education of professional investors with The CFA Institute (formerly The Association for Investment Management and Research). In this classic text, Ellis discusses the need to remain focused on the long term. Investors need not be reactive to every piece of news that confronts them. Let the other investors make the mistakes while you reap the rewards.

5. Against the Gods: The Remarkable Story of Risk
by Peter Bernstein; Wiley-Interscience, October 1988:
Risk is an over-used word in the investment profession. Bernstien brings the concept to life and gives it real meaning in this remarkable tale of the history of risk theory. Put into layman terms, many of the concepts bandied about make sense to the novice investor in his book.

6. Triumph of the Optimists: 101 Years of Global Investment Returns
by Elroy Dimson, Paul Marsh and Mike Stanton; Princeton University Press, January 2002:
Not for the casual reader, nor the frail reader, this heavy, large book analyzes investment returns from around the globe over 101 years. Full of charts and diagrams, long term returns are put into perspective as are the dangers of extrapolating returns from shorter periods. The effects of reinvestment are analyzed along with the biases contained in many of the world’s capital market indexes. A great read for the serious investor!

7. Warren Buffet Speaks: Wit & Wisdom from the World’s Greatest Investor
by Janet Lowe; Wiley, March 1997:
A collection of Buffet’s best writings, quotes and sayings about honesty, investing, running a business, paying taxes, school teaching, and so much more. It’s a great way to enhance your investing knowledge and a thoroughly engaging read.

8. Security Analysis
by Graham and Dodd; McGraw-Hill, October 1996:
For the serious investor or student, this book, originally published in 1934, is a timeless classic from which many of the lessons spelled out over seventy years ago are just as applicable today.

9. Handbook of Canadian Securities Analysis: A Guide to Analyzing the Industry Sectors of the Market, from Bay Street’s Top Analysts, Volumes I and II
by Joe Kan; John Wiley & Sons, Inc., January 2000:
A “how to” guide from some of Canada’s best analysts and strategists of the day. Very interesting reading for the very serious investor. These two large volumes take an effort to read and absorb some of the many insights presented.

10. The Mathematics of Investing
by Michael C. Thomsett; John Wiley & Sons Canada, Limited, September 1989:
Investors are lost without understanding the basic mathematics of finance. The text provides a useful reference guide for the novice investor in an easy to understand fashion.

11. The Undercover Economist
by Tim Harford; Anchor Canada, a division of Random House of Canada Limited, 2007:
Whoever thought economics could be fun? Tim Harford transforms the dismal science into a fascinating study of pricing theory, competitive advantage and many other heretofore laborious subjects, in understandable and recognizable situations. Want to know the truth about free trade or how to protect the environment? Read this book!

12. The Black Swan: The Impact of the Highly Improbable
by Nassim Nicholas Taleb; Random House, 2007:
A Black Swan Event is unpredictable, has a massive impact and is retrospectively “explained”. October 19th 1087 was a Black Swan as was 9/11. Black Swans occur but are largely ignored by forecasters and considered to be anomalies outside of our ability to model. Taleb challenges these notions and attacks the too often accepted concept that the “bell-” or “normal” distribution provides a proper framework from which to extrapolate events or their consequences. Teleb attacks the very premise of “Modern Portfolio Theory” and the “suits” that propagate its application. A bit hyperbolic at times, this is a worthwhile read that will cause you to question your perspective on events.

13. Poor Charlie’s Almanack: The Wit and Wisdom of Charles T. Munger
Forward by Warren E. Buffett and Edited by Peter D. Kaufman; PCA Publications L.L.C., 2005:
A collection of memories, speeches, writings and insights by one of the world’s greatest investors this book will amuse and educate you at the same time. The easy to read script of this book contains many valuable observations and tools for investors at all level. Mr. Munger provides the reader with a disciplined, practical and rigorous approach to analyzing and choosing securities. Although perhaps lesser known, Mr. Munger has for decades been a valued partner and confidant of Warren Buffett.

14. Guns Germs and Steel: The Fates of Human Societies
by Jared Diamond, Norton, 1999:
This book examines the theories of human and economic development. It follows an evolutionary path of human progress within the context of natural and comparative advantages at different points in history. The writing style may be laborious for some readers but Mr. Diamond puts forth a logical and rigorous thesis.

15. A Farewell to Alms: A Brief Economic History of the World
by Gregory Clark; Princeton University Press; 2007:
A great book to read and contrast with “Guns Germs and Steel”. Mr Clark contends that little economic development took place that benefited society as a whole until the eighteenth century. At that point a schism occurred when the industrial revolution in England brought unprecedented advances locally leaving much of the world behind. Why did this occur in that location and not elsewhere? Has the economic progress since benefited all societies? Mr. Clark presents a powerful thesis filled with facts and figures to substantiate his work.

16. The Logic of Life: The Rational Economics Of An Irrational World
by Tim Harford; Doubleday Canada, 2008:
I enjoyed Mr. Harford’s first book, The Undercover Economist, so much that I felt compelled to read his latest. I was not disappointed. In an interesting and provocative fashion, Mr. Harford explains how occurrences that would at first appear illogical, are in fact logical reactions to perceived future costs and benefits.

17. The Tiger That Isn’t: Seeing Through A World Of Numbers
by Michael Blastland and Andrew Dilnot; Profile Books Ltd, 2007:
Numbers are everywhere! Numbers are quoted and sighted to justify just about everything these days from investments to political courses of action. If you have ever been misled by statements like “this will increase your chances of getting cancer by one hundred percent”, this is the book for you. Entertaining and easy to read, you will never take statistics at face value again.

18. Billion Dollar Lessons
by Paul Carroll and Chunka Mui; Portfolio, 2008:
This is not “Good to Great”… more like “Good to Bust”! All too often we are bombarded with books and articles telling tales of fantastic business success stories. Billion Dollar Lessons takes the opposite approach as it recites well-chosen examples of business failures; many of which will be familiar to investors. As more acquisitions fail to meet their intended objectives than succeed, this book should be required reading for every CEO. As the authors point out, many common mistakes can be avoided.

19. The Snowball: Warren Buffett and the Business of Life
by Alice Schroeder; Random House Publishing Group, 2008:
Alice Schroeder has written a fantastic book about the life and times of the greatest investor of the modern era. This book goes beyond his investing style giving insight into the philosophy that has shaped Buffett’s approach to investing. His successes and failures are discussed in the context of how they tempered his adjusted the methodology over time. We see an evolution of a complex process that he makes look logical and deceptively simple. This book is a must read for fans of value investing or people that want a greater understanding of how it is applied. Alice Schroeder manages to maintain an entertaining edge on what could have been a very dry subject matter.

20. The Fundamental Index: A Better Way to Invest
by Robert D Arnott, Jason C. HSU and John M. West; John Wiley & Sons, 2008:
What is an index? How should Indexes be constructed? Investors today blindly put their trust in stock market indexes without any understanding as to their construction or appropriateness as a tool from which to judge risk exposure. Robert Arnott and his colleagues consider a compelling alternative to common index construction that has typically been based on market capitalization. They propose that more appropriate indexes can be built on basic fundamental economic data. An interesting read for investors with some core knowledge of market measures.

21. The Ascent of Money: A Financial History of the World
by Niall Ferguson; Penguin Press, 2008:
The story of money, from ancient times to the current crisis, as told through the lens of a historian, this is an enjoyable read. Ferguson follows the progress of human development as enabled by the evolution of finance. A number of financial concepts are explained in very understandable language.

22. This Time is Different: Eight Centuries of Financial Folly
by Carmen M. Reinhart and Kenneth S. Rogoff; Princeton University Press, 2009:
A comprehensive study of the many financial crises throughout the centuries, the authors present a detailed analysis backed up with exhaustive data covering sixty-six countries on five continents. This is not light reading but the content raises important issues given our current economic conditions and the governments response to meet those challenges.

23. The Big Short
by Michael Lewis; Norton Press, 2010:
The author of Liar’s Poker (Penguin, 2001) presents a riveting account of the most recent financial crisis and the events leading up to the calamity. An interesting perspective on many of the main characters at the center of the crisis and several of the individuals that saw it coming and profited handsomely betting against the “smart” money.

24. Too Big to Fail: The Inside Story of How Wall Street and Washington Fought to Save the FinancialSystem–and Themselves
by Andrew Sorkin; Penguin USA, 2010:
Another perspective on the recent financial crisis, Andrew Sorkin – a New York Times columnist – narrates a day-by-day account of the events as they unfolded and the reactions of the various parties involved. This book is hard to put down as you experience the tensions of the times as the world came so close to the abyss.