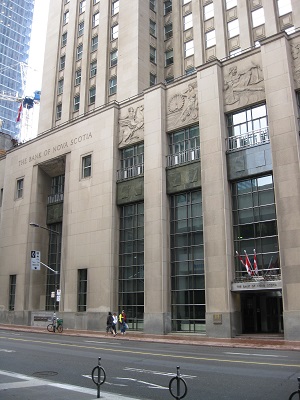 Analysts were expecting to see rising loan provisions over the past year drag down the Bank of Nova Scotia’s quarterly earnings, but its net income for the three months to April 30 shows little signs of that draining trend.

As the Financial Post reports, the bank’s high-than-expected second-quarter earnings suggest signs of improved credit quality, which will be music to the ears of investors.

Although Scotiabank’s provisions for credit losses increased 20% compared with the same quarter last year to $448 million, they were down 3% on Q1 and some 21% lower than the fourth quarter of fiscal 2014.

In a note to clients following the results, Darko Mihelic, analyst at RBC Capital Markets, suggested the figures were cause for optimism.

He said: “We did not see any true signs of stress in credit quality. Net impaired loan formations declined both sequentially and compared to the year prior.”

Net income for the country’s third-largest lender by market capitalization stood at $1.8 billion, or $1.42 per share, which is on a par with the figure reported in the same quarter last year.

Meanwhile, its adjusted earnings showed up particularly well, coming in at $1.43 per share, surpassing the average analyst estimate of $1.39 per share.

Scotiabank paid special mention to the $829 million profit derived from its Canadian banking unit, which it said was driven higher year-on-year by a 10 basis point increase in the net interest margin.

The bank will also be pleased with the performance of both its capital markets and international segments, allowing it to announce a new program in which it plans to repurchase up to 24 million, or 2%, of its outstanding shares.